At the ongoing Display Week 2021, Samsung showed off several of its display innovations, giving us a glimpse into the future of Samsung smartphone design. Samsung has also released a video showcasing a multi-foldable mobile display, a 17-inch foldable screen, and a slidable phone as a part of its Display week.

Eventhough it seems from CEO's keynote speech, that Samsung has no plans to release its rollable smartphone this year,we can expect the device to probably debut next year as the company has filed to trademark the name 'Z Roll' .

The trademark application was spotted by Let's Go Digital, and it implies that Samsung's rollable phones will be part of its Galaxy Z series and would probably debut as Galaxy Z Roll. As is often the case, the documents are thin on details but it seems to suggest that the Galaxy Z Roll would feature S Pen support.

This information in no way confirms that Samsung's first rollable phone will offer stylus compatibility, but it's still interesting info, Whereas Samsung's next foldable flagship, the Galaxy Z Fold 3, and clamshell Z Flip 3's successor, are also expected to offer S Pen support.

Information and concept video released by Samsung suggest that the Galaxy Z Roll will be capable of expanding horizontally. In its unrolled form, it will have a conventional form factor where as The additional display area will be handy for multitasking.

As Per past reports, the Galaxy Z Roll will have a 6-inches display, and the rollable tech, will allow it to expand to 8-inches.

Samsung allegedly demoed a rollable smartphone during CES 2020, and the company's Vice Chairman, Lee Jae-yong was allegedly seen holding a slide-out phone ,during a November visit to a research and development center in Seoul, South Korea.

A couple of other companies have also presented their rollable prototypes, but we don't expect them to turn into commercial products anytime soon.

Samsung on the other hand, seems eager to beat competitors to market. Industry insiders Ice Universe and Ross Young both claim that the Galaxy Z Roll will be released in 2022. 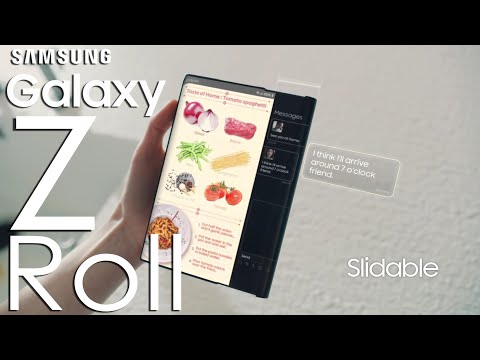