A few days ago Samsung shared a demo video of its display advancements and one of the concepts it showcased was a rollable unit. As we all know, concepts do not always make it to the real world, but with a new trademark granted by EUIPO (European Union Intellectual Property Office), Samsung might be taking this one very seriously. Recently, we learned that Samsung trademarked the name “Z Roll”, hinting that the company was working towards a device with an extendable display. Samsung has more recently trademarked the name “Z Slide” with the European Intellectual Property Office, indicating yet another entry into Samsung’s “Z” lineup of devices. The trademark is listed under Class 9, indicating a smartphone, mobile, telecommunication apparatus, or tablet computer. There’s no telling what the ‘Z Slide’ would look like. LetsGoDigital provided the following mockup render and speculates that the Z Slide may be a smartphone with an extendable display that grows vertically, meanwhile, the Z Roll expands horizontally to transform to a larger, tablet-sized display. You could also think of it as a rollable version of a Z Flip while the previously reported “Z Roll” is a rollable version of the Z Fold”.

The Render Images of the Galaxy Z slide is from
Letsgodigital - https://nl.letsgodigital.org/smartphones/samsung-galaxy-z-slide/

For More Smartphones Techknowledgy Information Subscribe The Channel And Hit The Bell Icon For The Latest Video When We Upload. 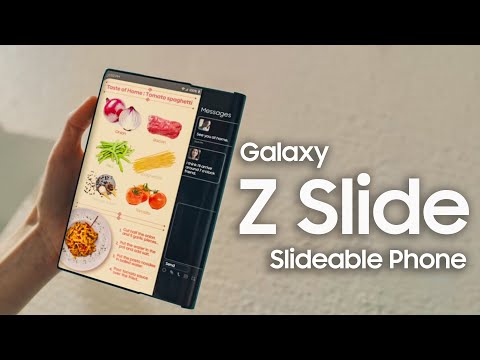 Hey Guys A few days ago Samsung shared a demo video of its display advancements and one of the concepts it showcased was a rollable unit. As we all kn...