Korean telecommunications operator SK announced a significantly speed upgrade of its 5G connectivity.
Kim Ji-yeon explains why this is good news for those dedicated to developing automous driving technologies.
Korea's major telecommunications operator SK Telecom said it's achieved a data transfer speed of 3-point-6 gigabits-per-second... in a test of its 5G network... on a connected car running at 170 kilometers per hour.
The test was conducted in collaboration with Ericsson and BMW... at the German automaker's driving center in Incheon, west of Seoul.
The data transfer rate is the fastest speed for a 5G pilot network... and double what SK Telecom achieved at the same location in November.
The company says it was able to do that thanks to beamforming and beam tracking technologies, which target satellites' relative positions.

5G is considered a must for connected cars that will allow autonomous driving and help prevent accidents.
Other technologies that could enhance the stability of connected car services... include improving image recognition and vehicle-to-everything communication technologies.
These features allow the cars to communicate, in real time, with other vehicles, traffic lights and surveillance cameras to understand and respond to unexpected situations and obstacles in a much shorter time.
SK Telecom said it will showcase the services accompanying its 5G network once it goes commercial in 2018.
Kim Ji-yeon, Arirang News. 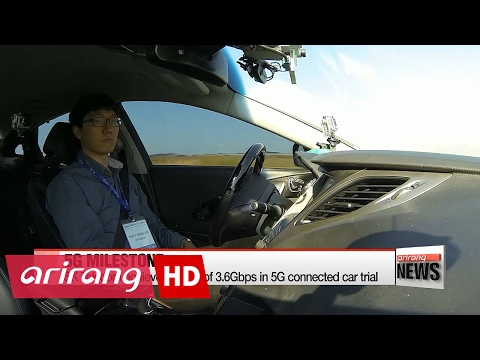